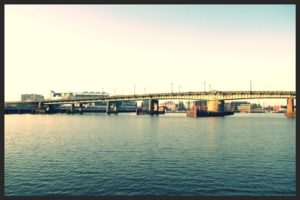 In support of the District of Columbia Department of Transportation, our team coordinated public outreach for a $29 million rehabilitation of the Frederick Douglass Memorial Bridge, which crosses the Anacostia River in Washington, D.C. The project was necessary to extend the life of the bridge, which opened in 1950.

A second and more innovative aspect of the project was lowering the western end of the westernmost pier 20 feet to enable the bridge to touch down at ground level, which allowed the previously-elevated South Capitol Street viaduct to be eliminated, fostering connections and a sense of community in the burgeoning neighborhood surrounding Nationals Park.

With the lowering necessitating a two-month complete closure of the bridge, our charge was reaching the 76,000 daily travelers and encouraging them to find another way. We created and executed a multi-media public information campaign and oversaw creation of a novel ride-sharing initiative dubbed “Bridge Bucks,” which provided $50 per month toward whatever alternative form of transportation best fit each individual’s needs.