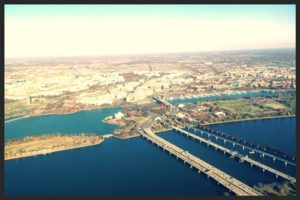 On behalf of the District of Columbia Department of Transportation, UM staff spearheaded public outreach for DDOT’s $27 million rehabilitation of the eastbound 14th Street Bridge.

The three 14th Street Bridges handle over 200,000 vehicles a day. What’s more, the northbound stretch of I-395 just prior to the bridge that was being rehabilitated was rated by INRIX, the leading traffic information source, as the D.C. metro area’s worst congestion hotspot. With the overall region burdened with America’s longest congestion delays, effective outreach to these most-gridlocked commuters was imperative.

We created a series of easy-to-understand graphics featured on a purpose-built 14th Street Bridge website and utilized social media platforms to increase awareness, including Twitter.

Carrying out stepped-out public information in advance of the project’s eight phases of construction, our effort was highly successful in alerting the public and encouraging use of commuting alternatives. Despite construction necessitating a variety of changing lane configurations and occurring immediately adjacent to massive daily traffic, the outreach effort helped travelers cross the bridge under traffic conditions that were approximately the same as before construction.